Beaucoup To Do in New-ahl-e-yuns

We spent the weekend familiarizing ourselves to the RV park and our surroundings. It seemed like a good time to do this since there was a strawberry festival going on in the French Quarter and we wanted to avoid the traffic and crowds caused by it. On Monday after talking to the visitor center and doing a little research on my own, we drove downtown to check out parking lots near places we wanted to visit. We knew from a past visit to the Quarter that parking could be tight for a truck as big as our 450. We found the parking situation much improved since 2003.

Tuesday we visited the French Quarter. First stop was for breakfast at the original Cafe Du Monde for beignets and chicory coffee. Even though the coffee stand is open 24 hours a day, 7 days a week, and we had arrived early, there was still a long line to get seated. it did move quickly and the beignets are worth the wait. 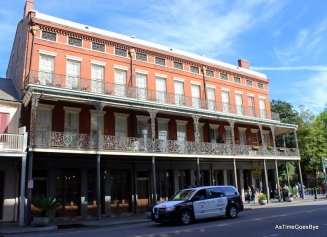 The world famous Cafe Du Monde has been a New Orleans institution since 1862 when it introduced beignets, a square French-style doughnut heavily dusted with powdered sugar, to the U.S.A. From the cafe we walked to Jackson Square.

Jackson Square is a historic park in the Quarter. Its listed as a National Historic Landmark as it was on this site in 1803 that Louisiana was named a U.S. territory pursuant to the Louisiana Purchase. The park was closed for renovations during our visit but we were able to walk around the outside perimeter. One of The Crescent City’s most renowned landmarks sits on the west side of the square, the St. Louis Cathedral. 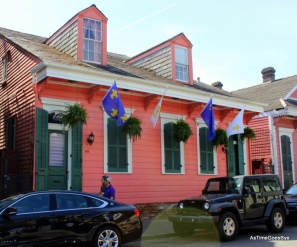 St. Louis Cathedral also known as the Cathedral-Basilica of Saint Louis is the oldest cathedral in the United States. It was founded as a Catholic parish in 1720 and is still in use today. The church is open to the public for self guided tours when services are not being performed. The cathedral is flanked on either side by other distinguished buildings. On the left is The Cabildo, the site of the Louisiana Purchase Transfer ceremony. To the right is The Presbytere, erected in 1813, it now houses the Louisiana State Museum.

Lafitte’s Blacksmith Shop Bar on Rue Bourbon, built somewhere between 1722 & 1732. The Lafitte brothers, Jean & Pierre are believed to have used this building as part of their smuggling operations. Jean Lafitte was a pirate & privateer in the early 19th century. 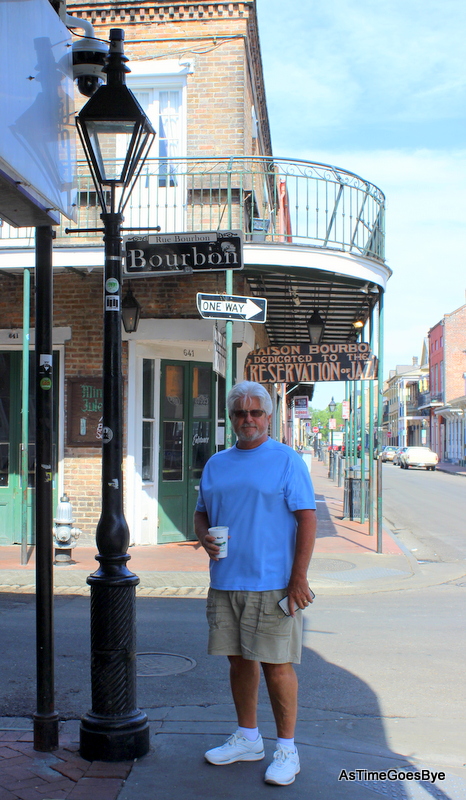 It was a short walk from the square to perhaps the most famous French Quarter street of them all, Bourbon Street. We covered it one end to the other then moved on to the French Market. After all of this browsing, and believe or not, no buying, we headed over to Central Grocery for lunch.

Central Grocery is a small Italian market and deli whose immigrant founder invented the muffuletta in 1906,  a sandwich that’s popular with tourists and locals alike. I’m not sure which is more unique, the grocery, or the sandwich. We enjoyed both the friendly atmosphere and the distinct flavor of the food. I must warn you, a whole muffuletta is enough to feed 2-4 people depending on their appetites. We did consider purchasing a container of the marinated olive salad that gives the sandwich its uniqueness but by the time we finished eating, the line was out the door. By this time, the day was getting hotter and the crowds were getting thicker, we decided to call it a day.

St. Joan of Arc statue in the French Market

Iberville, the founder of New Orleans

Wednesday we took a tour of St. Louis Cemetery #1. I had purchased our tickets ahead of time through the Save Our Cemeteries organization. I did this for a couple of reasons. First, a portion of the purchase price goes directly to the preservation of the cemetery, and secondly, my research taught me that we needed to visit on the coolest (temperature wise) day of our New Orleans stay, and we wanted to tour as early in the day as possible. You see, the cemetery is substantially warmer than the surrounding area, about 15 degrees so. At 10 am it was already registering 78 degrees and with the humidity at 90%, it was going to be a scorcher. I highly recommend for anyone interested in this tour to not only book early as we did but to wear comfortable walking shoes, sunscreen, wear a hat or bring along a parasol, and most importantly, bring water. I can’t emphasize the last enough.

Table grave stone so the deceased family could picnic & visit

No more burials permitted in this plot

Notice the table grave marker, this allowed the deceased’s loved ones to picnic while visiting. The small white marble plaque in the last photo proclaims the tomb as being closed to future burials in it.

We met our tour guide at the entrance of Our Lady of Guadalupe Church, another interesting piece of New Orleans history I would’ve liked to have toured. Unfortunately there was a funeral service going on at the time. It’s just a short walk from the church to the entrance of St. Louis Cemetery #1.

There are 3 St. Louis Cemeteries in or near the Quarter. They are numbered 1, 2, and 3. Cemeteries 1 and 2 are listed on both the National Register of Historic Places and the Louisiana African American Heritage Trail. Cemetery #1 is the oldest, 1789,  and the most famous. It has been in continuous use ever since.

These are called Oven Vaults because of their resemblance to bread/pizza ovens. Because of the extremely warm Summer temps in the region, these vaults act as a natural crematory for the dead. After 1 year and 1 day, the remains will “swept” to the rear of the vault into a shaft where the cremains will mingle with other’s cremains. This makes room for another body to be interred.

These Wall Vaults once stood 4 burial chambers tall but due to sinking they now stand only 2-2.5 chambers tall. The sinking is a natural occurrence because New Orleans is situated on boggy swamp land.

There are several prominent New Orleanians buried here but the most renowned is tomb is that of voodoo priestess Marie Laveau. Her grave is the third most visited grave in the U.S. behind those of President JFK and Elvis Presley. 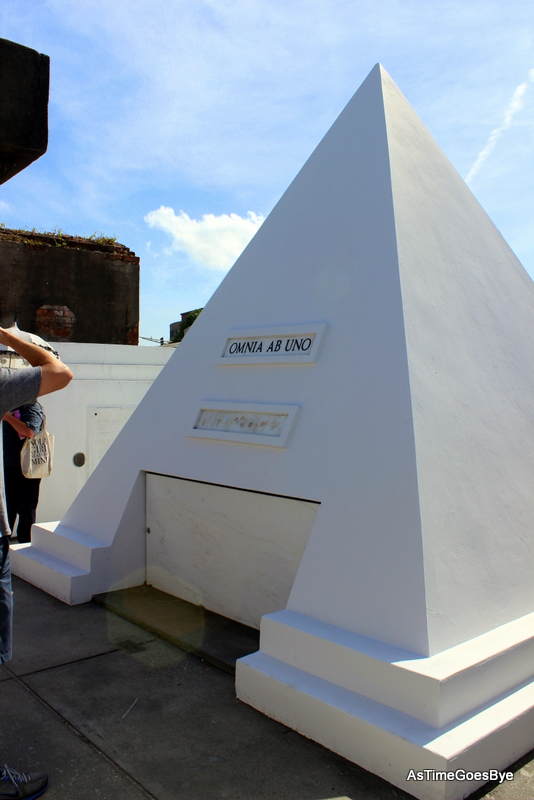 Notice the lip prints (kisses) on Nicholas Cage’s tomb. These were put there by his admirers, both women & men.

The cemetery covers just one square block but it is the final resting place of thousands. This is due in part to how burials are conducted here. 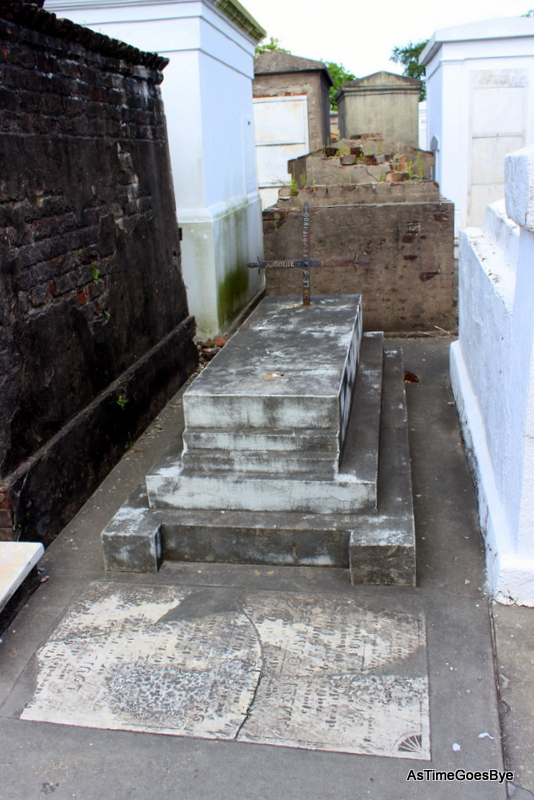 The oldest grave in St. Louis #1 predates the cemetery 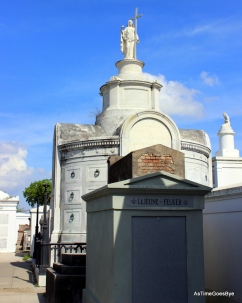 Because the Roman Catholic Diocese of New Orleans now owns and manages this cemetery, it is no longer open to the general public. That is because of the vandalism that has been inflicted to some of the tombs. Access can only be had via a tour unless you have family buried here, in which case you would need a pass to visit from the diocese.

Memorial tomb of the dead from the Battle of New Orleans, 1812. The wreath symbolizes victory, the inverted torches signify a life snuffed out.

This grave stone accurately depicts how the grounds are sinking.

After our tour was completed we drove to the Treme neighborhood to dine on fried chicken at Willie Mae’s Scotch House. It’s a family owned and operated restaurant that’s been serving up Southern-style soul food since 1957. We had many recommendations to try it. Don and I agreed that although the mouth burning, spicy fried chicken was tasty, it didn’t stand out as being any better than some of the other fried chicken food places we’ve dined at in the past. 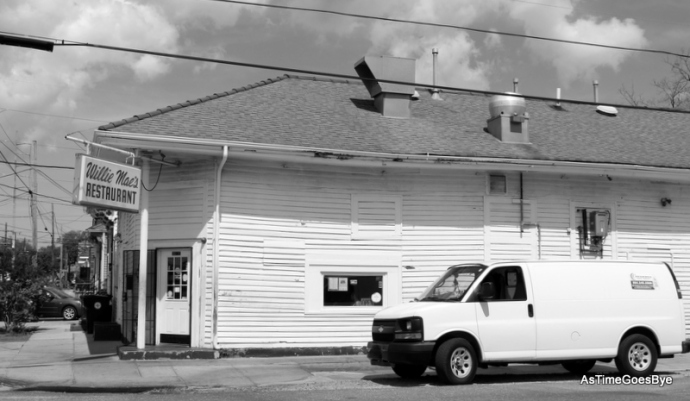 Here’s lookin’ at you kid

The Scrap House aka Katrina Memorial