This Place is Going to the Dogs

Its Carnival season! No, it’s not as big a production on The Forgotten Coast as it is in Mobile or New Orleans but the locals of Apalachicola know how to celebrate Mardi Gras alright and it literally is one for the dogs.

Apalachicola is the most dog friendly town we’ve come across. Dogs are welcome everywhere. We’ve met them as store greeters, we’ve seen them in restaurants and bars, we’ve also spotted them alongside their masters onboard fishing vessels.  That’s why it came as no surprise to us when we discovered Oyster Town’s annual Mardi Gras was hosted by The Mystic Krewe of Salty Barkers, a parade unit of dogs and their people.  This year’s theme was Bark Side of the Moon and the dog lovers came out in droves. They lined the streets to watch the pups strut their stuff and afterwards mingled at Riverfront Park for live music, Cajun food, and fun of all sorts.

The 3 of us made a day of it. We started off with a stop at the Apalach farmers market where we picked up a breakfast of fresh cinnamon rolls. Since I had just grocery shopped the previous day, we passed on making any purchases of vegetables or seafood. We did buy a container of local Tupelo honey though, it’s said to be the purest and sweetest honey there is. Having never tried it before we wanted to taste it for ourselves.

Eventually we made our way to the riverfront in time for the parade. Beau did not participate but he did get plenty of attention on the sidelines. Afterwards we went to the Pesky Pelican for the shrimp dinner. This was our first time taking Beau out to eat with us. We’ve been hesitant to do so as he’s not always on his best behavior. He did us proud though. Maybe there’s hope for him after all.

As for the rest of February, it was a very busy month.  Beau has a huge fan club here at Carrabelle Beach Resort, both two legged and four. People greet him by name as he goes on his daily walks and most give him pats and belly rubs. He’s also learned which campsites to stop at along the way for a treat. He often meets up with doggie pals at Carrabelle’s dog friendly beach where they enjoy romps in the surf, retrieving float toys and making dog angels in the sand. Yes, our Beau Bear has learned to swim and now we can’t keep him away from the water. I know one little boy who isn’t going to like leaving his little slice of paradise when our time here is up. 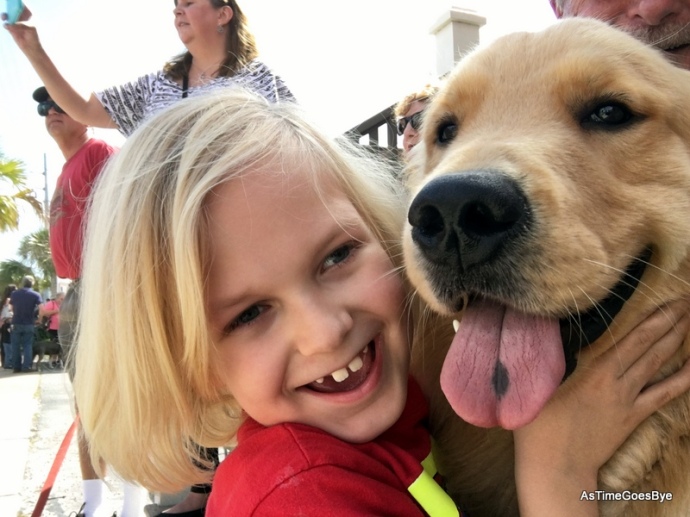 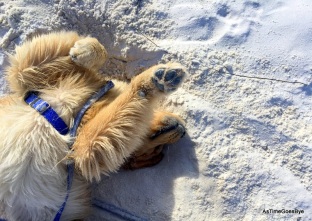 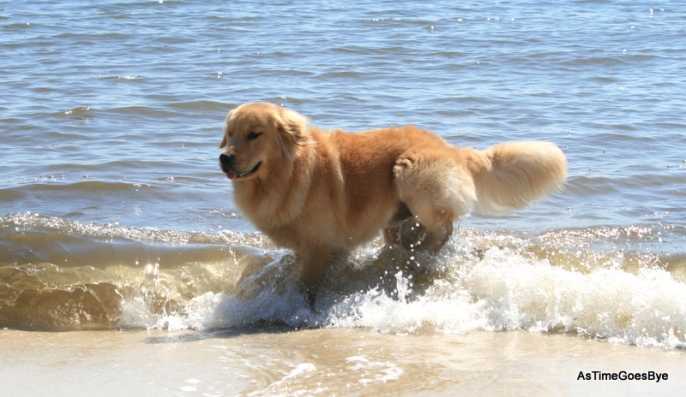 February is also when Don and I celebrate our wedding anniversary, Valentine’s Day to be exact. We now have year 32 in the books. Our neighbors told us that the historic Wakulla Springs lodge at the state park hosted an annual 4 course Valentines Day dinner. They boasted about how good the food was. We’d heard that from other campers too so we made reservations to attend. I must say they do a pretty good job. The ambiance was wonderful. Lights were dimmed,  tables were set with white linens and candlelight, and a violinist and oboist played softly for the diners. However the highlight of the evening was indeed the meal. Beginning with the crab claw appetizer straight through to the Bananas Foster dessert, our meal was delicious. The drive home along the moonlit coastline was the icing on the cake.

Wakulla Springs Lodge, the dining room is on the right 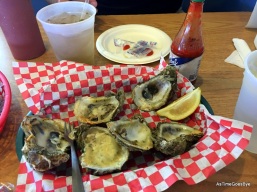 Another celebration this month was my 60th birthday which we spent on Saint George Island enjoying the beach and eating at the Blue Parrot, a SGI icon. I taught Don the proper way to eat oysters out of the shell with saltines and Tabasco sauce. He discovered it tasted better than it looked. 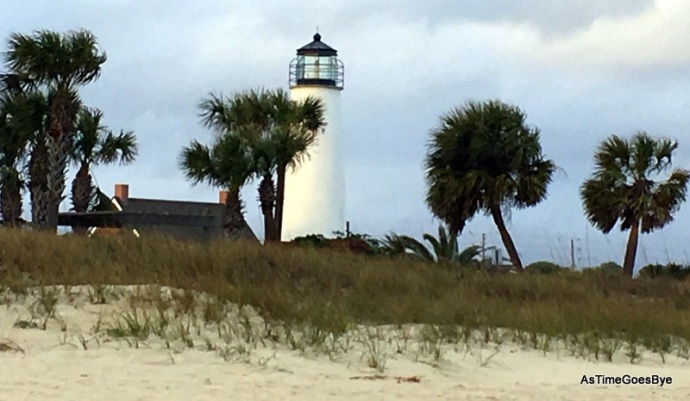 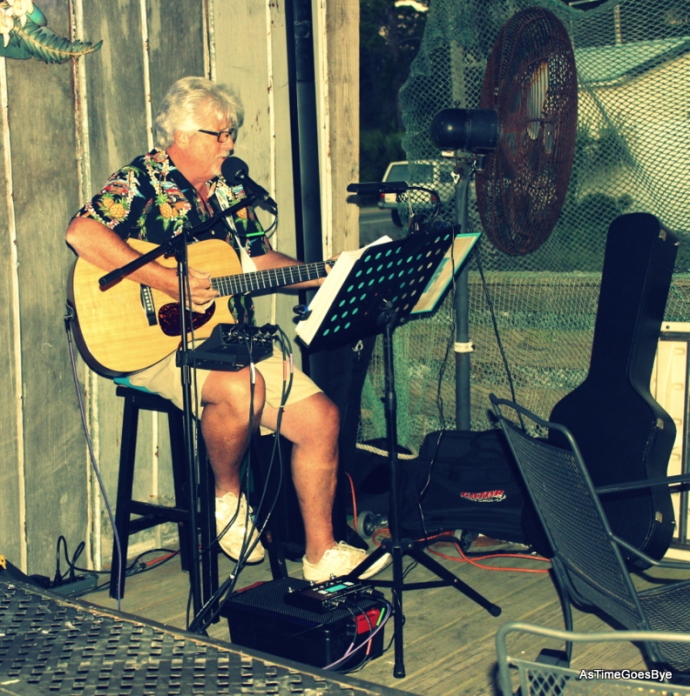 Lastly, Don has spent much of this month tweaking his music, all for good reason. With the weather starting to turn and the Spring Breakers now joining the Snow Birds, many of the restaurants with outside seating are beginning to offer live entertainment. Since we are now on a first name basis with the owners of the Pesky Pelican, Jewel had been after Don to bring his guitar in and sing. He agreed to do so on the last Friday of the month.  Apparently, he was a success since he’s been asked to play again. 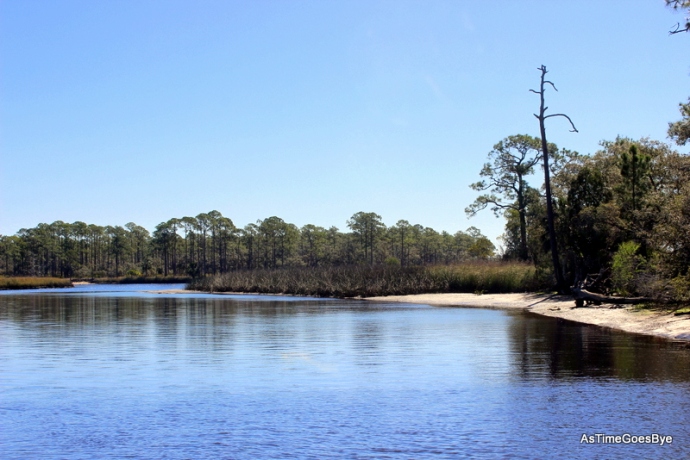 Another function we attended was the Ochlockonee River State Park’s Stone Age & Primitive Arts Festival. The festival featured primitive fire making, fishing and hunting techniques, and flintknapping. Flintknapping is explained as a process of chipping away silica rock in order to make items such as spears, arrows and tools. It was very interesting to watch but I noted it was a long and tedious process. Another topic we found interesting was a hunting practice called Atlatl, a combination of spear chucking and archery. We were told that some of Australia’s Aborigines still employ this method of hunting. I’m certain if Don and I had to rely on this method to put food on the table, we would surely starve to death.

Notice the arrow shooting across the mastodon

We have been here for 3 months now, thus, I am starting to get that restless feeling again. I have begun making short term travel plans for us but nothing concrete for the summer yet. Things are still up in the air as we wait for a procedure my father is having the first week of March. The results should tell us , whether or not he will be having open heart surgery this summer. That will determine our plans. Until then, here’s lookin’ at you kid…..

4 thoughts on “This Place is Going to the Dogs”