Well here we are in central Florida. This wasn’t part of our original plan but it works for the time being. We had intended to spend 1 week each in 3 different locations to do a little exploring but alas, it was 3 weeks for me, a little less for Don, before we started to feel “normal” again. It’s good to have our stamina back. 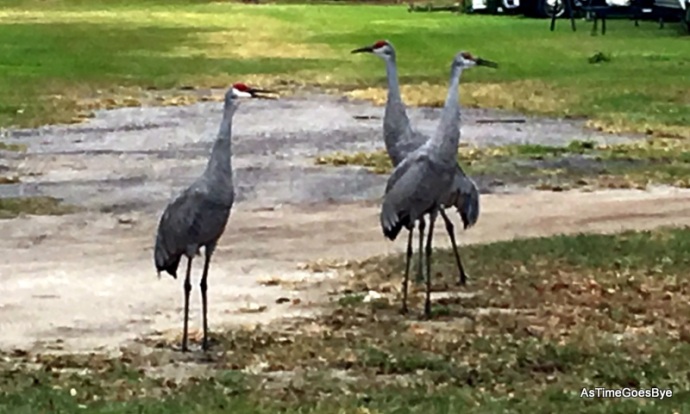 This trio of Sandhill Cranes are frequent visitors to the park. (The photo quality is poor as I had Beau with me so I took this from a distance as I didn’t want to scare them away)

Don knew I was back to my old self when I went into cleaning mode. I had us both whipping the Suite Pea back into shape inside and out. It took us 3 days before I was satisfied but once done, it improved my mood significantly. (I should clarify, neither of us had been up to cleaning since becoming ill and Beau’s hair was everywhere.) Then it was off to the doggie spa for Beau to spiff him up too.  Now, with that all done, we’re ready to explore our surroundings.

Lego serpent of the lake. He’s been greeting visitors to Disney Springs since it opened. 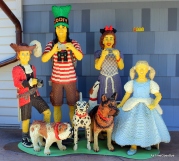 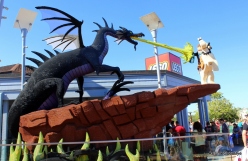 First on the agenda was Disney Springs. We had been here once before, 13 years ago, and was surprised to see how much it had grown. We enjoyed browsing the shops and checking out the art sculptures, most were new to us but we did find a few old favorites. This was the perfect outing to finish up our Christmas shopping for the grandchildren. Afterwards we had drinks and lunch at Bongo’s Cuban Cafe. We liked the mosaic tile art on the walls as well as listening to the upbeat Rumba and Salsa music. Always a good time when visiting any Disney property. 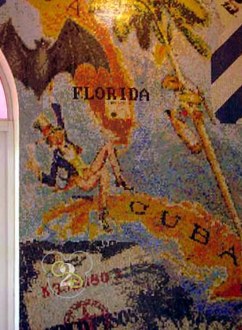 Folks who know me well know that I’m a Donald Duck fanatic. My “Duck” collection was one thing I simply could not part with when we became road gypsies. My mother graciously offered to store it for me.

At bedtime one evening, Don and I both were having difficulty falling asleep. Don’s restless leg syndrome was in overdrive and my brain refused to disengage and quiet down. So with us both laying in bed wide awake staring at the ceiling, it was a good time to talk. And talk we did, until well after 2 am. Don is not as crazy about the full timing lifestyle as I am, he’s more of a some timer or snowbird(er). He doesn’t object to the scenery changes, it’s just that he prefers to sit longer than I, and he doesn’t care for the frequent packing to move process. I on the other hand can’t travel fast enough or often enough. After one or two weeks of sitting in one place I  become antsy, except for when we are parked for the winter. Probably because I understand that moving around from place to place in Snowbird Season is virtually impossible in warmer climes. We both agree that the only way to make this lifestyle work for the two of us is through compromise. The fact that we both want for the other to be happy too helps. So we are going to change things up a bit.

Don and I both are fond of Florida. We love the tropical atmosphere, the warm weather, and especially the beaches. He longs for familiarity. Don wants an RV park that he can return to year after year, seeing familiar friendly faces. He wants a town that he comfortably knows his way around in. He wants to establish Florida as our state of domicile, and he wants our health care professionals to be in Florida. Lastly, he wants to do all of this for at least 4 months during the winter, preferably for 5-6. The remainder of the year is all mine. Mine to decide where we’ll go, where we’ll stay, and for how long. This sounded fair to each of us. I did however remind Don that it could take a couple of years before he finds his perfect slice of Florida.

Since reaching this decision we felt we were in the perfect location to do some exploration of RV parks and towns that could fit the bill for Don. Our first all day adventure took us north to Bushnell, then west, all the way across to The Gulf, then we headed southward as far as Dunedin before calling it a day. We checked out several parks we had researched beforehand along the way, and drove through a few of the  towns trying to get a feel for them. Nothing captured, nor held our attention. At least we were able to rule out a sizable area.

Our second all day venture took us east to Titusville. We have visited this area in the past and it seemed like the perfect location for us with easy access to many of the places we like to go. We did our research and came up with 3 RV parks that sounded promising but unfortunately none of them proved to be a good fit for us. It was very disappointing.

Our third and final outing took us southwest to Bradenton and Sarasota, then down the gulf coast as far south as Punta Gorda. It was in Punta Gorda where we struck pay dirt, not once, but twice. One park was already taking names for the 2017 winter season so we immediately added our names to their list. The second park asked me to call back in January which I intend to do as we liked this facility a wee bit more than the first because of the larger campsites. So now we wait and keep our fingers crossed.

Our off days have been full too. Don has been working on his music, we’ve attended some park functions, and we’ve found two nearby dog parks that have worked wonders for our fur baby’s high energy. He’s gotten in plenty of off-leash socialization and has become fast friends with an 8 month old Husky named Coach. Coach and Beau meet here regularly. 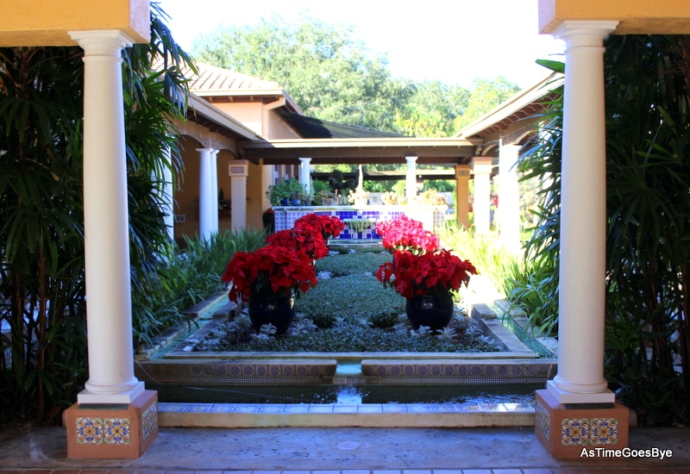 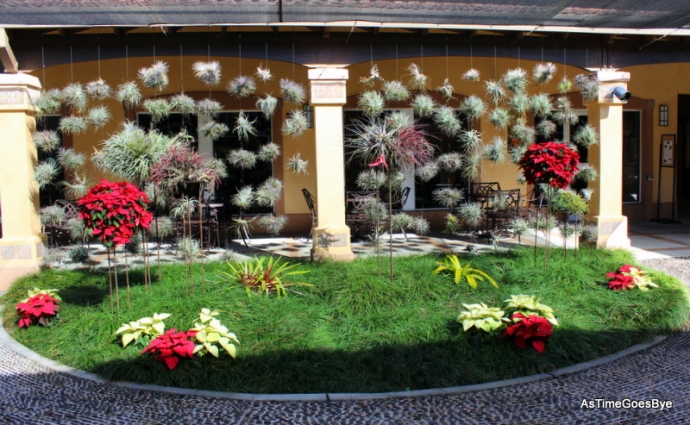 An old habit of mine that I have carried over into the gypsy lifestyle is capturing some of the spirit of Christmas in the 3 days immediately following Thanksgiving. I reason that most people are out hunting for Black Friday sales thereby making the holiday attractions less crowded for us.  I was told that Bok Tower would be ringing out Christmas carols throughout the day and that Pinewood Estate which is on the grounds, would be decked out in Christmas finery as well. On Friday morning we drove past the local mall and several department stores with full parking lots and made our escape to 50 lush acres of flower gardens, orange groves, pine forests, and wetlands.

We began our exploration of Bok Tower Gardens at the visitors center where we watched a short 15 minute film on the history of the tower and estate. From there we followed the intricate River of Stone from the courtyard to Hammock Hollow Children’s Garden. I thought the flowing pattern of the pathway was beautiful. Whimsical pavers etched with wildlife were scattered here and there amongst the stones. It must have taken many man hours to lay it all so perfectly. 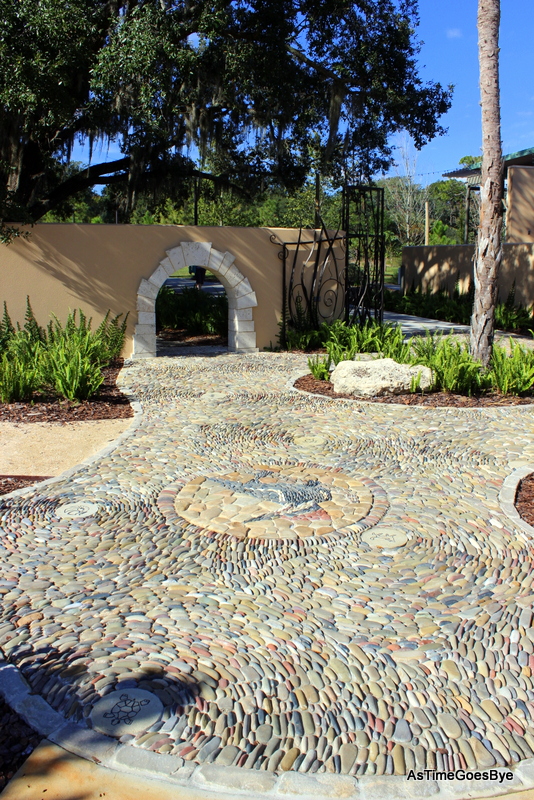 I fell in love with this walkway

The children’s garden was just as delightful as the stone pathway. It had many unique features encouraging tots to climb, build, dig and create. It made us wish we had our youngest grandchildren with us. They would have enjoyed it as much as or more so than we did. Something else we noticed, volunteers had strategically placed little snowmen ornaments around the garden for children to find and keep. Every so often we’d hear a squeal of joy from a child having found one.

The River Walk is a water play area of misters & sprays. 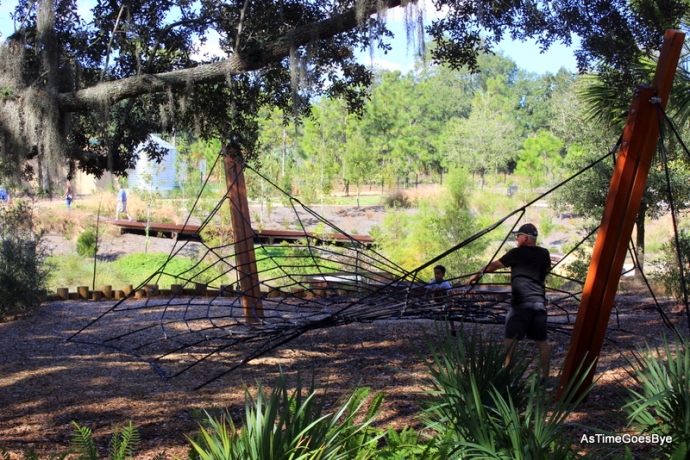 Giant spider web to climb in the Children’s Garden

I found the perfect spot to hang out for awhile. 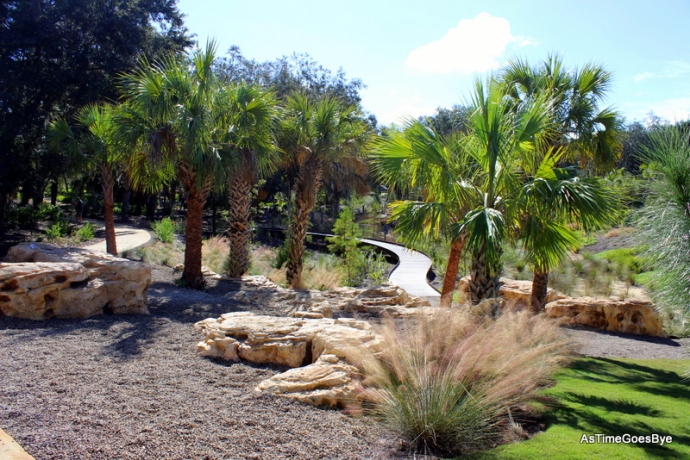 We followed the path that took us by the Endangered Plant Garden and Window by the Pond then cut across to Bok Tower, also known as The Singing Tower because of the 60 bell carillon housed inside. 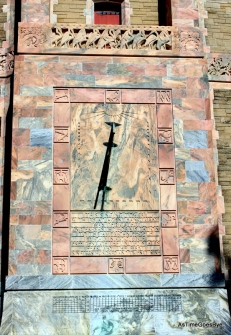 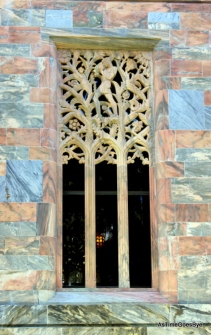 The tower was built in 1929 and dedicated by President Calvin Coolidge. Commissioned by Edward Bok, former editor of “The Ladies’ Home Journal” and a Pulitzer Prize winning author, as a centerpiece to the landscape garden and wildlife sanctuary. It’s made of pink marble and coquina shell, a combination of neo-Gothic and Art Deco, it stands a lofty 205 feet tall. The stunning brass door has panels depicting the story of creation from the Book of Genesis. Upon Edward Bok’s death in 1930, he was laid to rest at the base of the tower, between the Genesis door and the lily-padded reflecting pond. 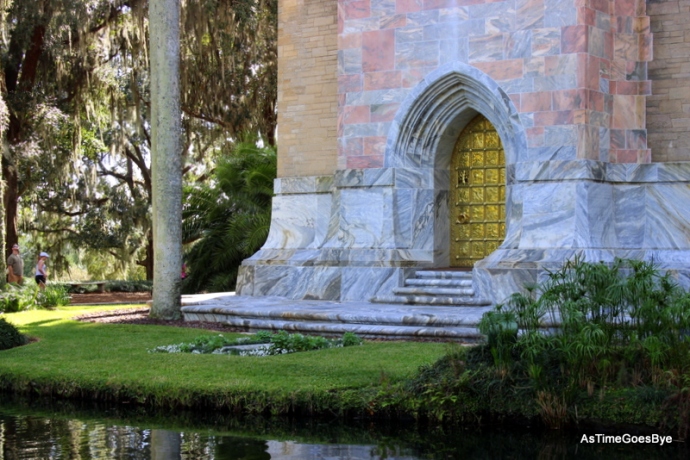 We sat on one of the many benches surrounding the tower, admiring its architecture and listening to the bells toll out Christmas tunes. Eventually we made our way to our final stop, Pinewood Estate. Pinewood is a luxurious 1930’s Mediterranean-style home. Decorated for the holiday season, the 20 room estate is open for public tours. We chose not to tour the house, opting to tour the gardens instead. 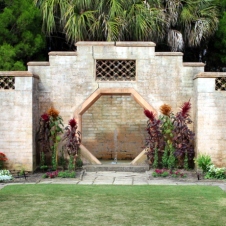 Having completed our outing sooner than we expected, we elected to stop at Fiddlers Ridge Farms & Winery to sample it’s very popular blueberry wine. The owners are quite proud of their honey wines and encouraged us to sample some. I was reluctant as I had sampled some honey mead wine at our favorite Indiana winery and didn’t care for it at all. I acquiesced and left with 4 bottles of honey wine in my procession, along with 3 each of the blueberry and peach. I understand the honey wine will go well with our Christmas ham.

Our time here will soon be coming to an end. We will depart Dec. 1 for Carrabelle, our winter spot for this season.

Here’s lookin’ at you kid……

7 thoughts on “Communication & Compromise: key ingredients for a happy marriage”