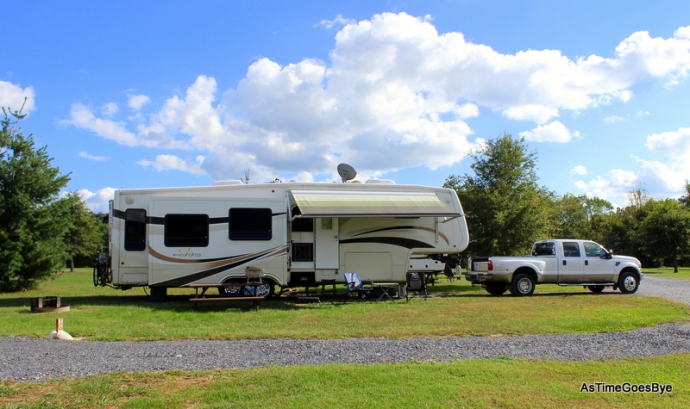 Our campsite at Outlanders River Camp in Luray, VA

John Denver sang about her,

Carl Sandburg wrote about her,

“a butter of dandelions slung on the turf, climbing blue flowers of the wishing woodlands wandering; a midnight purple violet claims the sun among old heads”

When you’re here it’s easy to understand how this valley has touched the hearts and minds of those that pass through. From the lush green, round topped mountains to the crystal clear mountain streams; from the rich history of the valley to the southern hospitality of the people; we have delighted in the beauty that has surrounded us this past week.

Our view to the west.

Our view to the east. 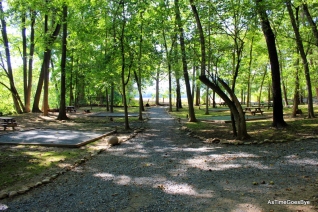 The view from our campsite alone has made this a favorite stop. Nestled in a bend of the Shenandoah River, we look westward and see Massanutten  Mountain and the Appalachian range. To the east lies the rolling Blue Ridge Mountains and the historic Appalachian Trail. It is so very peaceful and until Friday evening, we along with one other couple were the sole campers. The 4 of us reveled in it. At night, being a good 5 miles from the town of Luray, no lights penetrate. The darkness is so complete. The star gazing would be awesome except we haven’t had the blessing of a cloudless day (or night) since we arrived. Because of them, my photos don’t do justice to the views from Skyline Drive in Shenandoah National Park but they did contribute to the somber setting of the Civil War battlefield we visited. 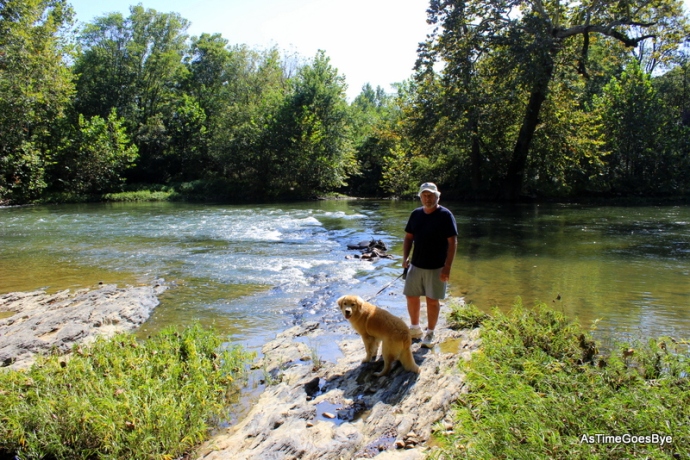 The Shenandoah runs just beyond the tent sites.

I imagine the views from on top the Blue Ridge Mountains are breathtaking no matter which season you visit but there’s something about the crisp mountain air and splendid array of Autumn colors that makes it a little more special. We had such high hopes of finding color in the higher elevations but that wasn’t the case. We arrived too early and will depart too soon, and yet, the scenery didn’t disappoint us. We even took the time to walk a small portion of the Appalachian Trail just so we could say we did. 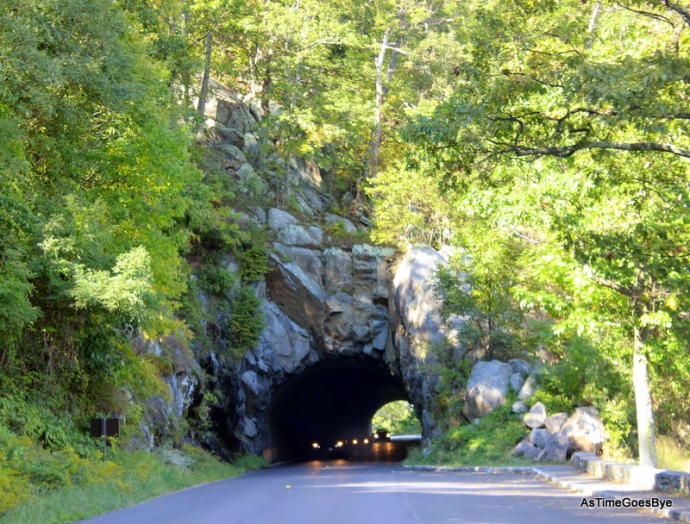 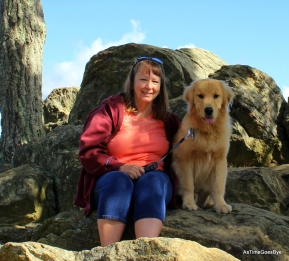 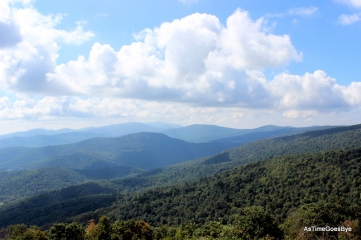 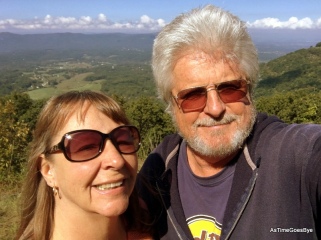 Beau works up a mighty thirst from hiking the trail.

Virginia is rife with history, and Don and I are history buffs, the period that we find most fascinating is that of America’s Civil War. We discovered one of the war’s lesser known battles occurred not too far from us, the Battle of New Market. 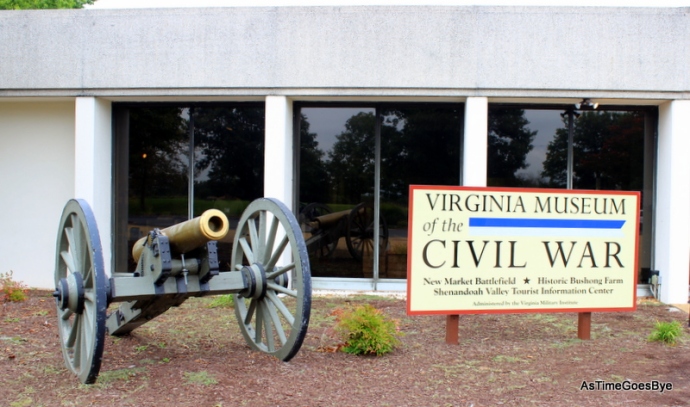 We took a day to walk the battleground and learn about the day the Virginia Military Institute’s cadets were reluctantly called into action, some as young as 15 and 16 years old.

THE BULLET THAT NEVER FIRED

“The musket was knocked off my shoulder by a piece of shell…I was struck over the right eye and Dr. Ross sewed up the wound immediately in the rear of our line and while it was going forward into fight.”  –  Charles H. Read Jr. VMI Class of 1867 Private, C Company

The useless musket was taken home by Cadet Read with its unused powder & bullet lodged in the barrel. The unfired .54 caliber Minie Ball was forgotten about for 135 years until it was discovered during a safety check and removed in the spring of 1999.

On the right is body armor taken from a Union soldier. While armor was never officially adopted by either armies, it was popular in the Union army very early in the war.

Stained glass window depicting the war in the Shenandoah Valley by abstract artist Ami Shamir. This photo does not depict all of the detail seen by the naked eye.

Our first stop was the Virginia Museum of the Civil War where artifacts and dioramas convey the story of the Civil War in Virginia. In the adjoining theater the Emmy award winning film “Field of Lost Shoes” is shown. It tells the account of the battle.

In 1864 the Bushong farm’s field of wheat became a battleground. Three generations of the family took shelter in the basement of their home. After the battle, they continued to live in the basement as their home became a hospital for the wounded.

In the Spring of 1864, Lt. Gen. Ulysses S. Grant sets in motion a plan to press the Confederates into submission via taking control of the strategically important and agriculturally rich Shenandoah Valley.

Having received word that the Union army under Maj. Gen. Franz Sigel had invaded the valley, Confederate Gen. John C. Breckinridge pulls all available forces to meet the threat. The VMI cadets heed the call along with Breckinridge’s 4,500 army veterans. The two armies met at New Market on May 15, 1864.

Experiencing devastating fire to the center of the line, Breckinridge is forced to put in the 257 VMI cadets. Stationed along the orchard fence line of the Bushong family farm, the cadets charged valiantly across the Field of Lost Shoes sweeping over the Federal position and capturing a battery. Sigel made a hasty retreat leaving the valley. Of the 257 cadets that fought, 40 were wounded, and 10 lost their lives.

“The Field of Lost Shoes” The wheat field was so saturated by days of rain that the deep mud sucked the shoes from the cadets feet as they advanced across it.

We along with everyone else in the east and southeast section of the U.S. are busy monitoring Hurricane Matthew. Our future travel plans are contingent on how severe the damage is and its impact on our preferred route south. Our prayers are with the good people of Florida, Georgia, South Carolina, and North Carolina at this time. Be smart. Stay safe.

The simple tale will tell:

It marks the spot

Heres lookin’ at you kid…….