Looking for a place to overnight on our way to Virginia, we decided Donegal, PA fit the bill. About halfway to our destination and close enough to Ohiopyle State Park to do a little sightseeing of the Youghiogheny River (pronounced Yawk-uh-gay-née) and Ohiopyle Falls. 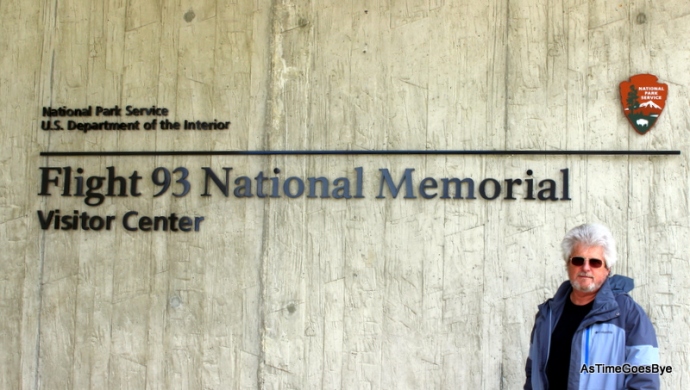 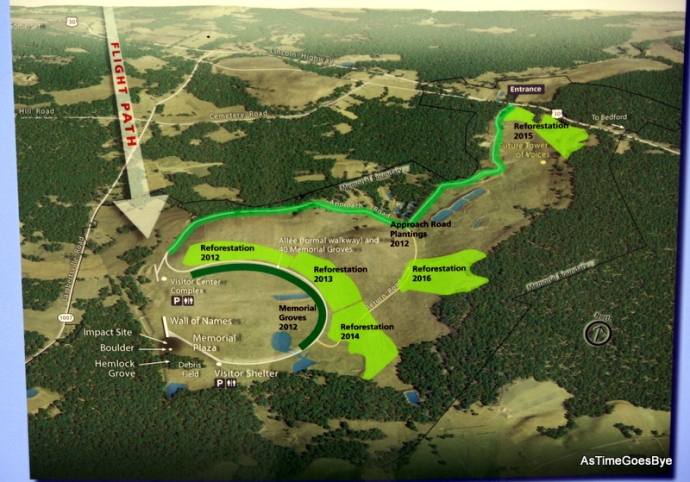 During check in at Donegal Campground our plans took a detour. It was then we learned we were only about 30 miles away from the Flight 93 Memorial. Having only enough time to do one or the other, it was unanimous that we would see the memorial.

September 11, 2001, our generation’s Pearl Harbor as Don calls it. It is morning on a beautiful late summer day and 4 commercial airplanes have just been hijacked by terrorists. Two are flown into the World Trade Center’s towers in New York City. Another plane hits the Pentagon in Arlington, Virginia. The fourth and final plane, United Flight 93, bound from Newark, New Jersey to San Francisco, California, is delayed 25 minutes from its scheduled departure. It is that delay that enables the passengers to become aware of the terrorist attack on America and, to know just what fate had in store for them once the terrorists on board begin to put their plot into action. 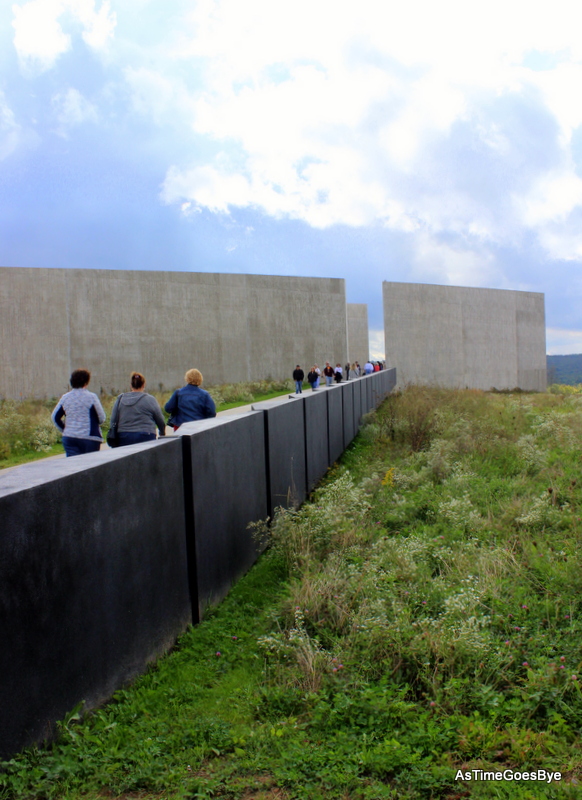 Western Overlook. This area was the location of the command post for the investigation & the location of multiple temporary memorials. It is aligned with Flight 93’s crash path.

The open green space was the debris field. It encompasses 40 acres. It is the final resting place of the passengers and crew.

Looking straight down the flight path from the overlook. 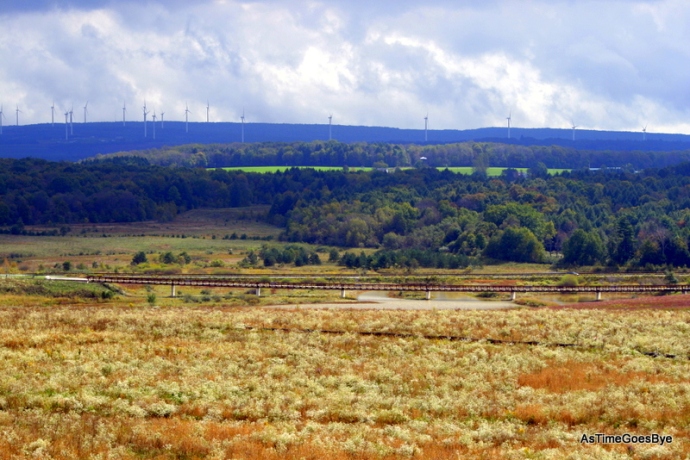 The memorial is for them, the ordinary citizens who with extraordinary courage, fought back and in so doing, saved the lives of countless others. This national memorial tells their story. It was a very somber, moving experience.

Pathway to the Arrival Court where interpretive panels tell the story of Flight 93. 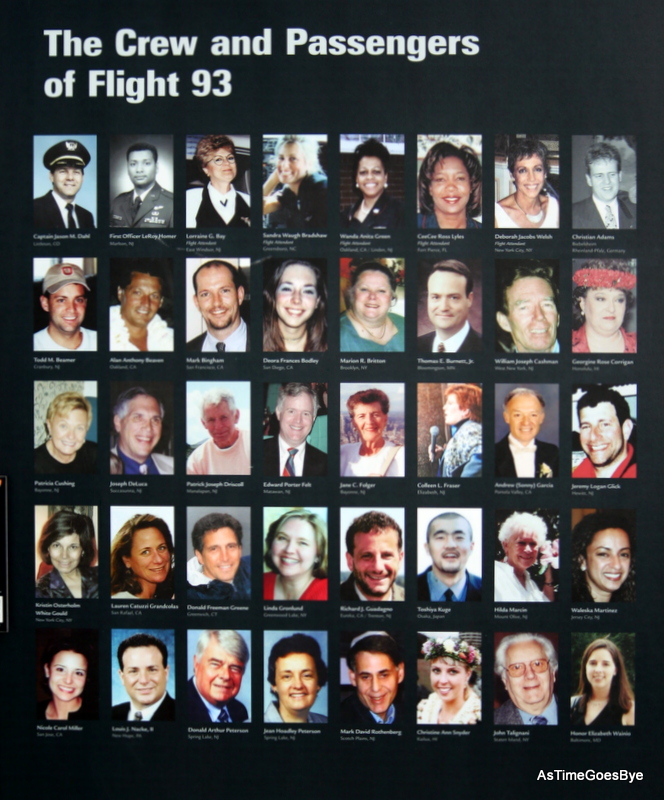 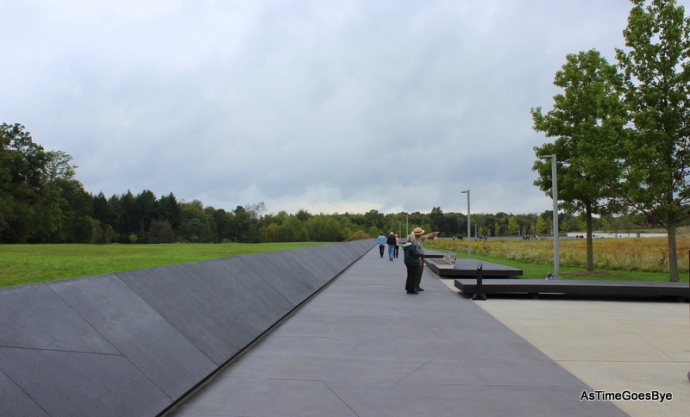 Memorial Plaza. The long sloping black wall marks the edge of the crash site & debris field. Visitors can leave tributes in small niches in the wall. 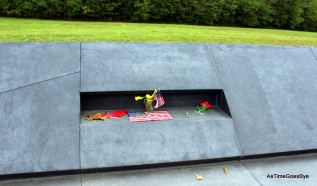 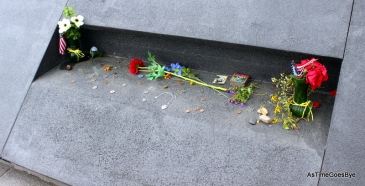 The Wall of Names & Flight Path. The Wall of Names has 40 inscribed white marble panels to honor the passengers & crew. The inscriptions are all in black except for the panel with the date inscribed. It is to the right of the open space. 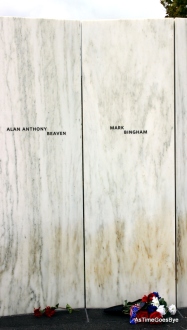 The Wall of Names consists of 40 individual marble slabs, each engraved with the name of a Flight 93 passenger or crew member. 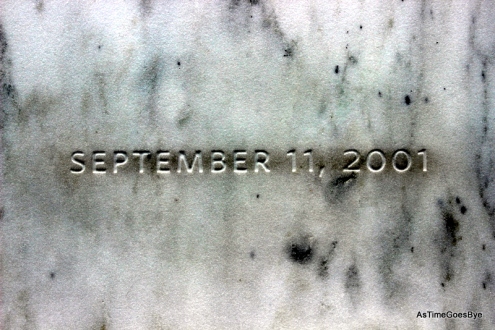 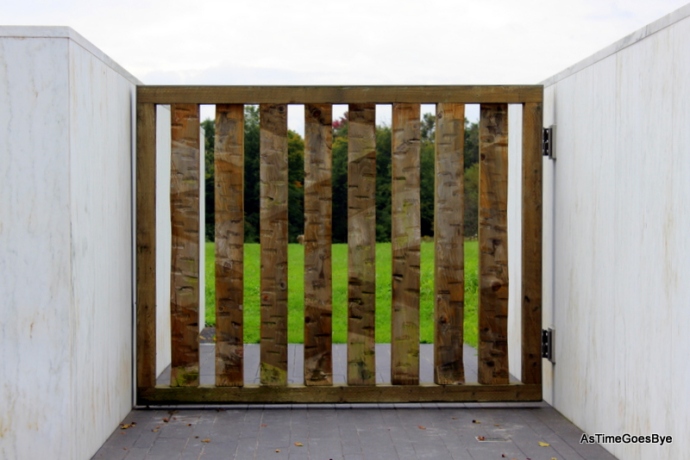 The Ceremonial Gate overlooks the path of the impact site.

Hemlock Grove & Impact Site. At the edge of the field is what remains of a hemlock grove damaged by the crash of Flight 93. A gap is visible where the damaged trees were removed. At the base of the grove is a boulder which marks the general location of the impact site. The FBI excavated the site & the crater was later filled in at the direction of the coroner.

Looking back toward the visitor center observation deck.

If we had only known there would be so much to see and do here, we would have planned accordingly. Suffice it to say that if we find ourselves near here in the future we will one, find a different park to stay in, and two, stay longer. 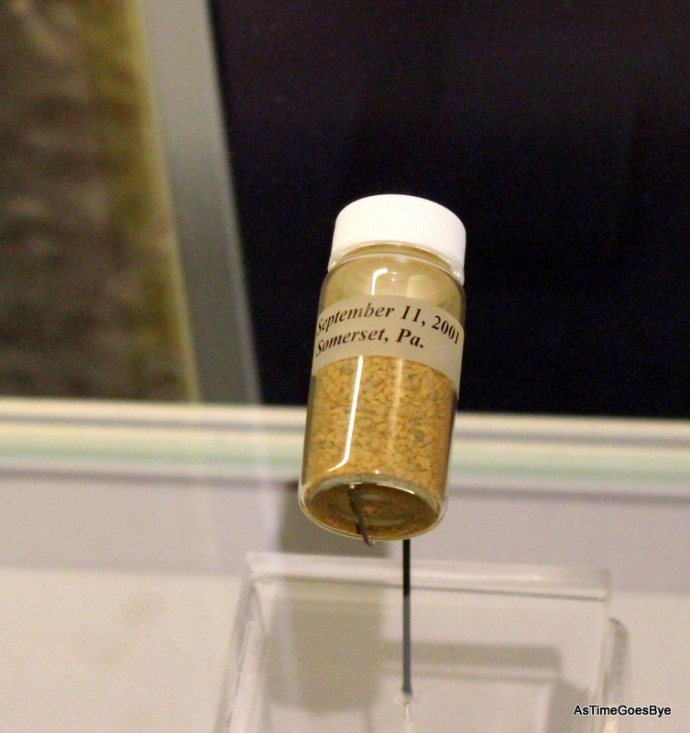 Vial of Soil. The American Red Cross gave each family member a small vial of soil from the crash site at the memorial service in September 2001.

Now for a little info about Donegal Campground. I chose it because it’s conveniently right off the I-70/Pennsylvania Turnpike (there is road noise but it’s not overpowering) and it has 50 amp full hookup sites. Don balked on first sight. It’s heavily wooded and has a rustic look to it, he’d have no satellite tv. No U of M football, no Detroit Tiger baseball! He was ready to go somewhere else.

The Suite Pea at Donegal Campground

I convinced him he could manage for 2 nights. Once we settled in though, his attitude changed. Much to his surprise and mine, the site was level, the hookup included cable, and the park’s free wifi worked perfectly. 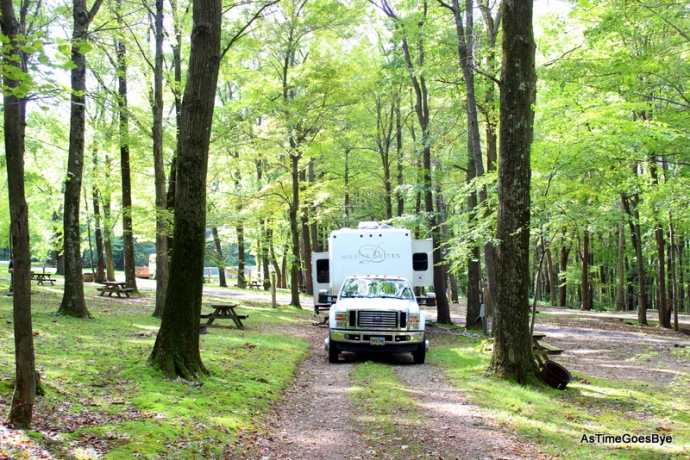 As you can see, we have the place all to ourselves.

Although this type of facility wouldn’t be to our liking for a week or more, it definitely works for a night or two if you can tolerate the very poor water pressure. It is the worst we’ve ever seen.

Until next time, here’s lookin’ at you kid…..

6 thoughts on “Just Passing Thru”