Carnival and 2015 in Review 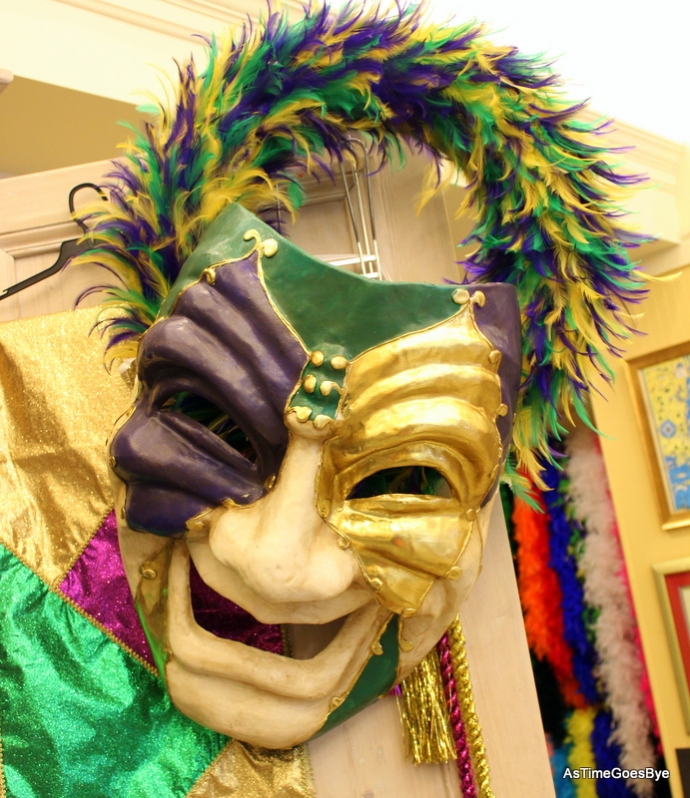 It’s that time of the year once more when we look back on the past 12 months to review its highs and its lows but before I go into that I want to talk about something new we get to experience. The something new has been taking place in Mobile, Alabama for over 300 years. Okay maybe it’s not so new but it will be the first time for us to experience it. It, being Carnival. 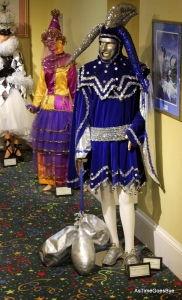 These costumes would be worn by a mystic society member on board their “Emblem” float. (I will explain this in a later parade post.) The jester costume is from the Knights of Revelry. The wearer would be known as “Folly.” Folly is carrying painted cow bladders & may use as many as 200, 3 at a time tied to a stick, to sound his call for making merry over the course of the ride.  The attire below represents the Order of the Inca. 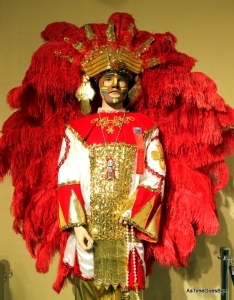 In our campground planning committees are being formed to organize themed events. In nearby towns, decorations in green, purple, and gold are going up and in Mobile the barriers along the parade routes are being put in place. Everywhere you look there are signs touting this Mardi Gras party, that Carnival ball, and the bakeries are pushing us to get our King cake orders in. All of this ballyhoo is new to us and yet, we find ourselves getting caught up in all the excitement.

First things first though. Since both of us hail from the Midwest, we are unacquainted with the event and its customs other than what we’ve seen broadcasted out of New Orleans on Mardi Gras. We felt a little research was in order and where better to educate ourselves than the Mobile Carnival Museum. 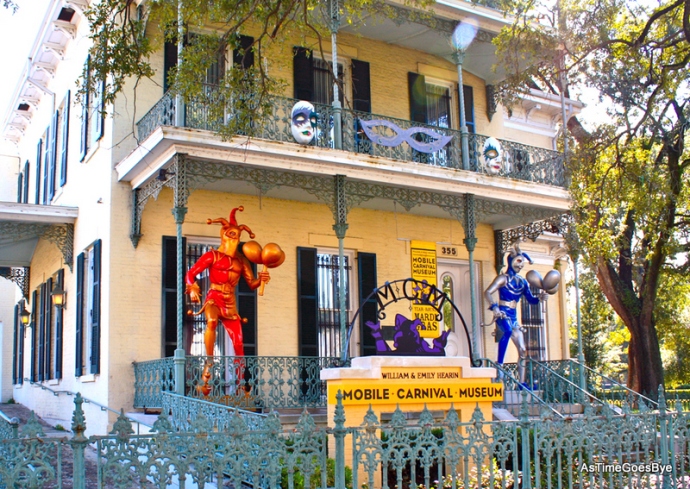 Usually we don’t venture out to attractions on weekends because of the high volume of people we’re likely to run into but not wanting to be stuck inside any longer on yet another rainy day, we made the drive across the bay and we are so glad we did. Saturday’s are the one day of the week that L. Craig Roberts volunteers at the museum and the locals will tell you there is no one better to learn from concerning Mardi Gras. He is considered to be a leading authority on the subject and has even authored a book on the matter, “Mardi Gras in Mobile.” 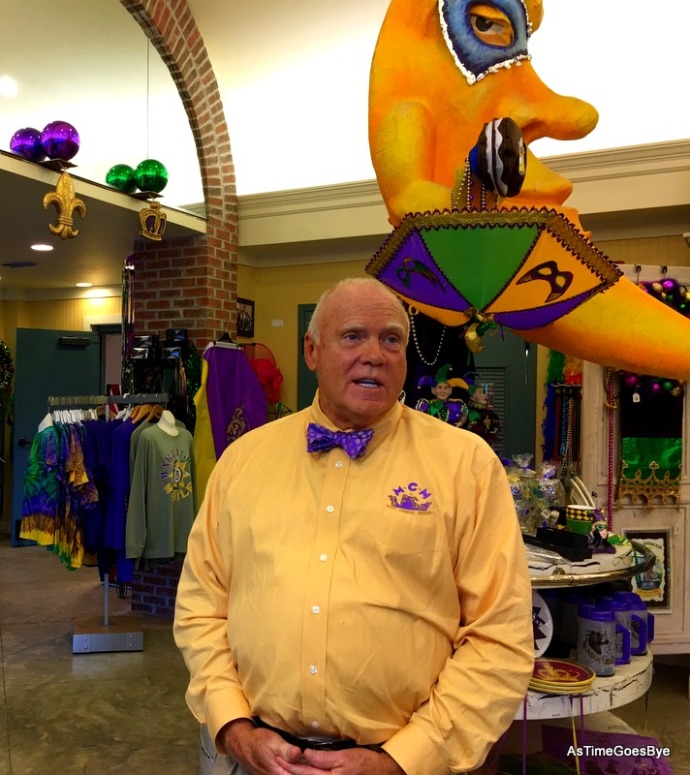 Our docent at the museum, L. Craig Roberts

We spent 3 1/2 hours touring the museum, viewing attire, learning the symbolism, the traditions, and so much more. There is so much effort and money that goes into this event. There are people whose jobs are focused solely on Carnival the entire year. In 1875, the Mobile Carnival Association convinced the Alabama legislature to declare Mardi Gras Day a legal holiday in the city. The schools close their doors for the entire week leading up to Mardi Gras. 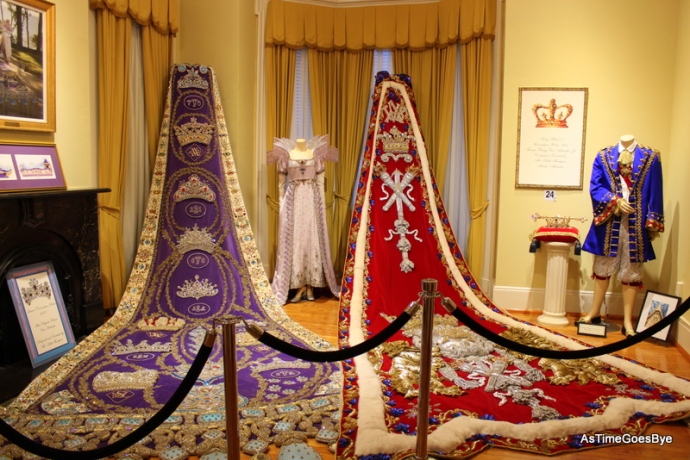 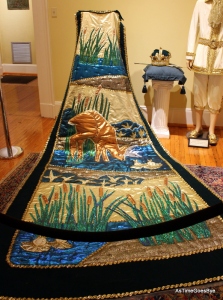 The robes are elaborate & no two are alike. 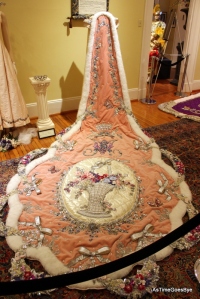 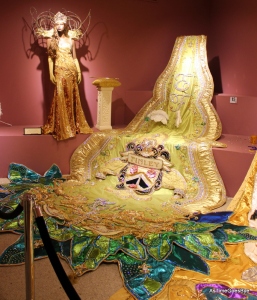 Each robe is designed with the wearer in mind. Hand stitched, they take several months to assemble.  The crystals & many of the gems  used in the robes  are genuine. Often, a family will reuse fabric, fur or jewels from trains worn by previous family members. The trains can be quite cumbersome so plastic is sewn to the underside for easy gliding as well as to protect the robe from dirt. Heavier robes have been known to have rollers attached underneath. All this is done in secrecy. No one but the King’s or Queen’s family see the mantle until the night of the coronation. 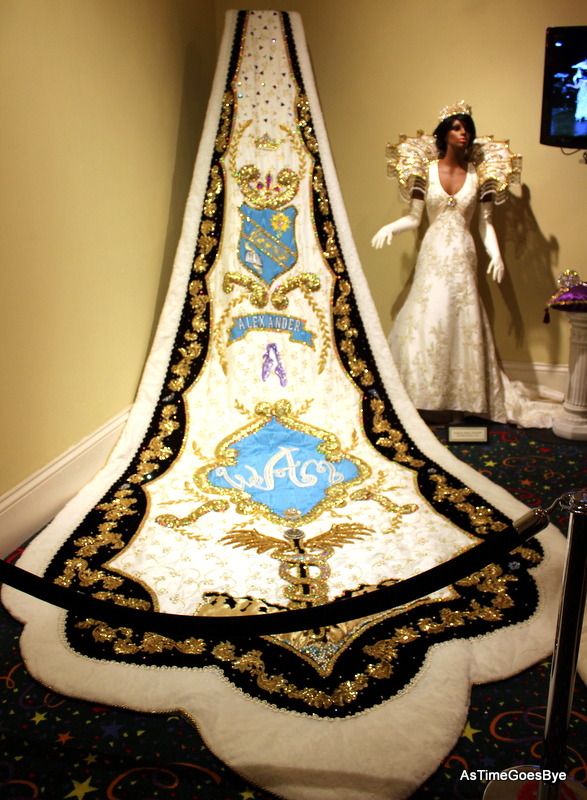 Each robe reflects the king or queen’s personalities, accomplishments, interests, &/or families. This is the train, dress & crown  worn by a recent queen. 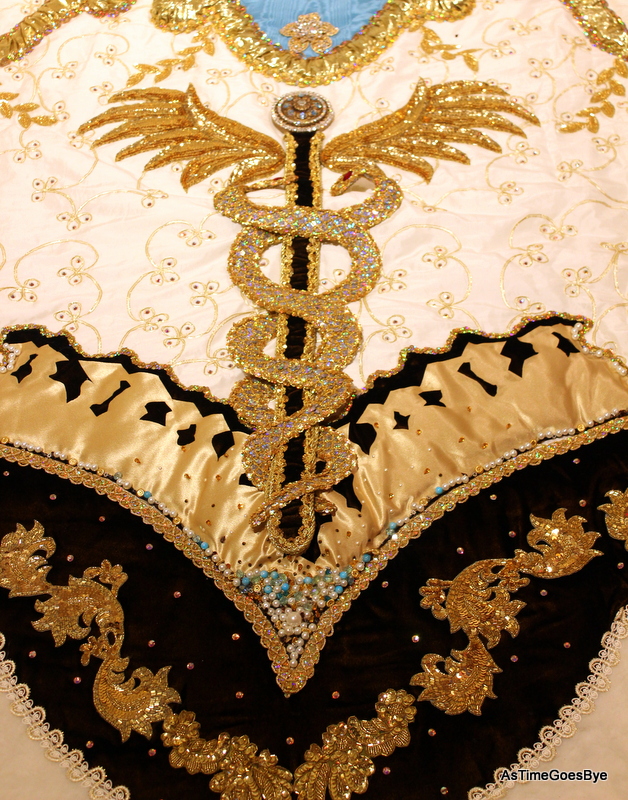 This queen was studying to become a doctor, thus the medical symbol. 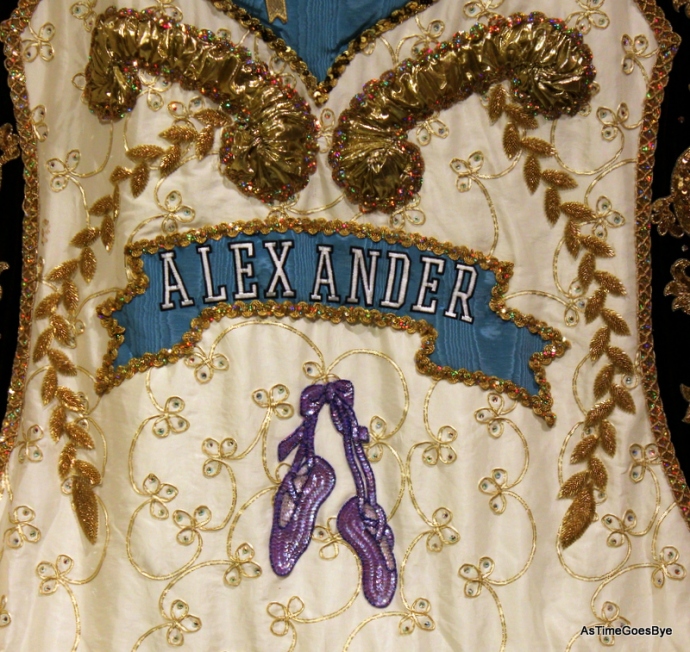 She is from the Alexander family & was also a ballerina. 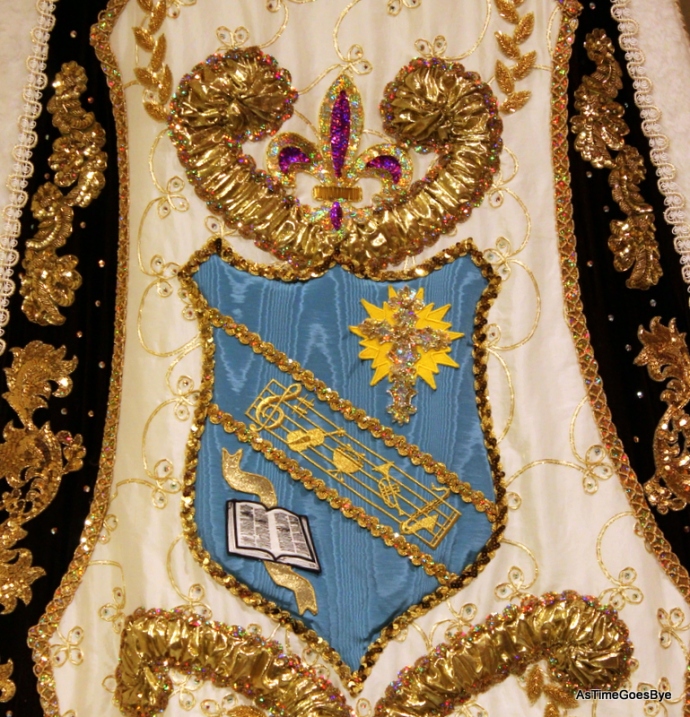 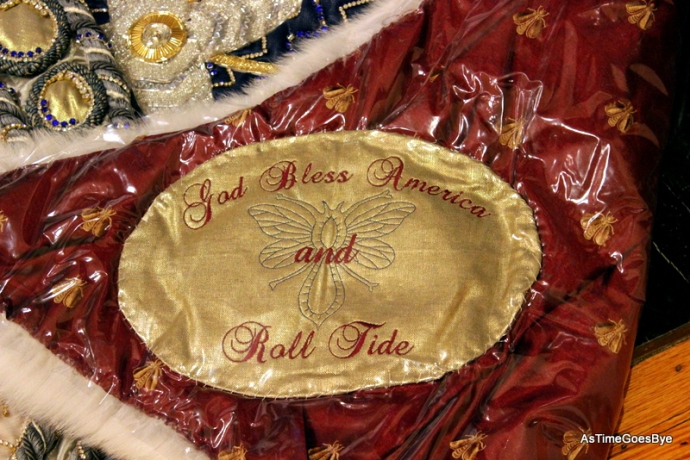 The underside of robes are covered with plastic, not only to protect the robe but also to assist with its moving across the floor easier. Heavy robes may even have rollers or skates underneath. This queen is obviously a huge University of Alabama fan.

A few facts that were made abundantly clear to us were,

First, “Mardi Gras is the day, Carnival is the season.”  Mardi Gras aka Fat Tuesday aka Shrove Tuesday is the day before Ash Wednesday, the beginning of Lent. Carnival is all the parades, balls, and parties that begin on Twelfth Night, the Feast of Epiphany, and continue up to Mardi Gras.

Second, Mobile was the first city in the New World to observe Mardi Gras beginning in 1703, 15 years before New Orleans began celebrating.

And more importantly, Mobilians look with scorn upon the New Orleans celebration of Mardi Gras. In Mobile it is a family oriented, kid friendly festival and not the bawdy, lewd spectacle that it has become in The Big Easy. 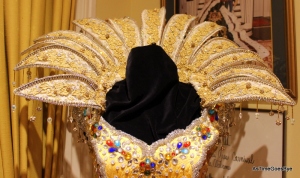 The collars can weigh as much as 80 lbs. each 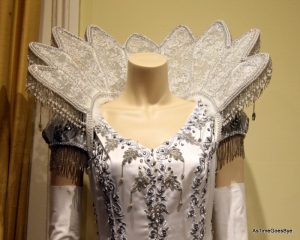 With much thanks to Craig who educated us on the different parades, routes, best viewing spots, and on parking, we are eagerly anticipating the day we attend our first parade.

Tables are elaborately set for the balls. 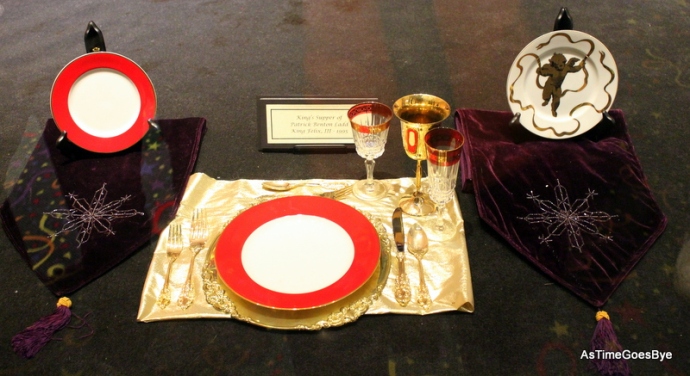 After our tour we stopped for a delicious lunch at Felix’s Fish Camp where a server was kind enough to point out Sheila to me, the resident 15′ gator. The only gator we have seen here in lower ‘Bama in all the years we have visited the area. Then on our way home we stopped at a bakery for, what else, a King cake. 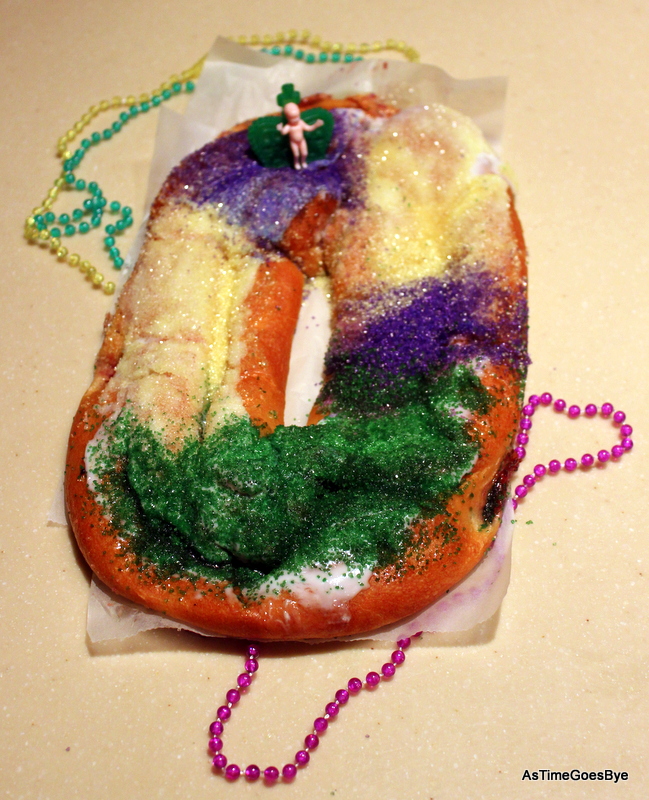 The history behind the King cake is this.

It is believed to have originated in France around the 12th  century. These early Europeans celebrated the coming of the three wise men bearing gifts for the babe twelve days after Christmas, calling it the Feast of the Epiphany, Twelfth Night or King’s Day.

The main part of the celebration was the baking of a cake to honor the three Kings. The cakes were made circular to portray the circular route used by the Kings to reach the Christ Child, thereby confusing King Herod as to His whereabouts. Remember, King Herod was trying to follow the wise men to Jesus so that he could slay Him.

In the early King cakes, a bean, a pea or a coin was hidden inside the cake. The person who received the piece with the hidden prize was declared King for the day, or was said to have good luck in the coming year.

In Alabama and Louisiana, Twelfth Night signifies the beginning of the  carnival season. The beans, peas, and coins have been replaced by a small plastic baby symbolizing the Christ Child. The person who gets the baby not only has good luck but is also expected to host the next carnival festivities.

Typically they are decorated in the Carnival colors of purple, which represents Justice, green, representing Faith and Gold for Power. The cakes are filled with either a chocolate, strawberry or a cream filling. Ours was strawberry and frankly, quite good.

Our Year In Review

We spent much of our year being parked in 3 different areas for months at a time. Twice was by choice, one was not. January, February, and  March found us wintering amongst friends in North Fort Myers, Florida. This was by choice. We like the campground, the people who operate it and the area. Plus there are four bonuses, friends we’ve made in the campground, friends who winter in the vicinity, dog friendly beaches and of course the weather. That far south you’re bound to have perfect beach weather most every day. 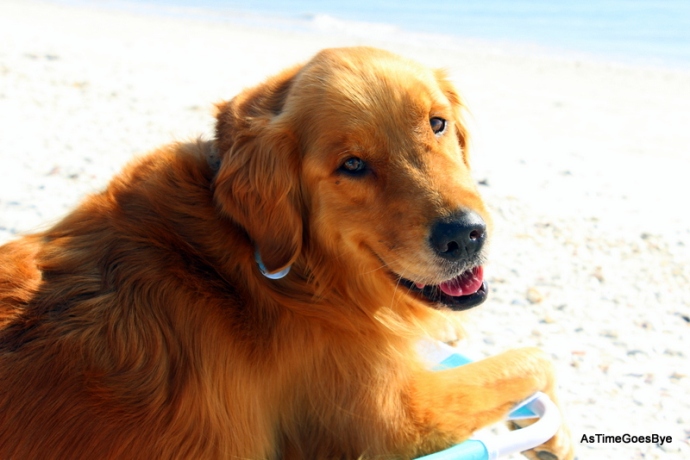 The end of April until Labor Day found us parked in a Jellystone Park in Bloomington, Indiana. This isn’t the type of park we would normally choose to stay at because of the noise and lack of campground etiquette by the campers but Bloomington has very few affordable rv parks for long-term visitors. The grandchildren like it though and that counts for something. Our purpose for being here so long was one of the highlights for the year, the birth of our granddaughter Kendra Marie. 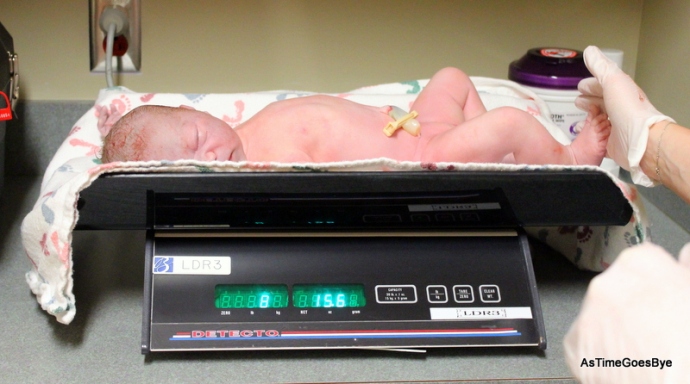 Our final long-term stay and the one where we are currently settled is Summerdale, Alabama. We like the park, the surrounding towns, and the plentiful activities and attractions to be had here BUT it wasn’t where we had truly wanted to be for the winter season. It gets cold here! Much colder than we like it. That being said though, financial and medical circumstances led us to be here.The many repairs we had to make on both the Suite Pea and the truck were excessive. That combined with medical expenses from both of Don’s surgeries hit our pocketbook hard. It seemed as if everything, including Don, fell apart in unison. We hope to recoup some of our losses by staying at a more affordable park than we had originally intended. So that’s a plus. Another is the convenience to I-65 should we need to head to Indiana or Michigan to attend to family matters. That brings us to another low in 2015, Don’s mother. Her failing health has on sitting on pins and needles. 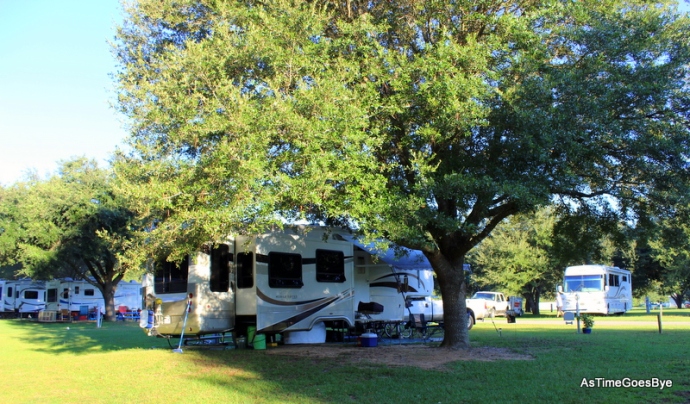 Our site for the season.

Another downside, for me at least, is sitting so long in one location. My brain stagnates and I have difficulty keeping up with the blog as there is such a sameness to our days. I find myself feeling antsy. I read the posts of the other full timers blogs that I follow religiously and I want to go where they are. I want to experience the things they are experiencing. I grow impatient with yearning. I believe this is what is affectionately known as “Hitch Itch” by longtime road gypsies. I hope that 2016 smiles down upon us move favorably than its predecessor and we are able to seek out new territory. Until then,

here’s lookin’ at you kid. 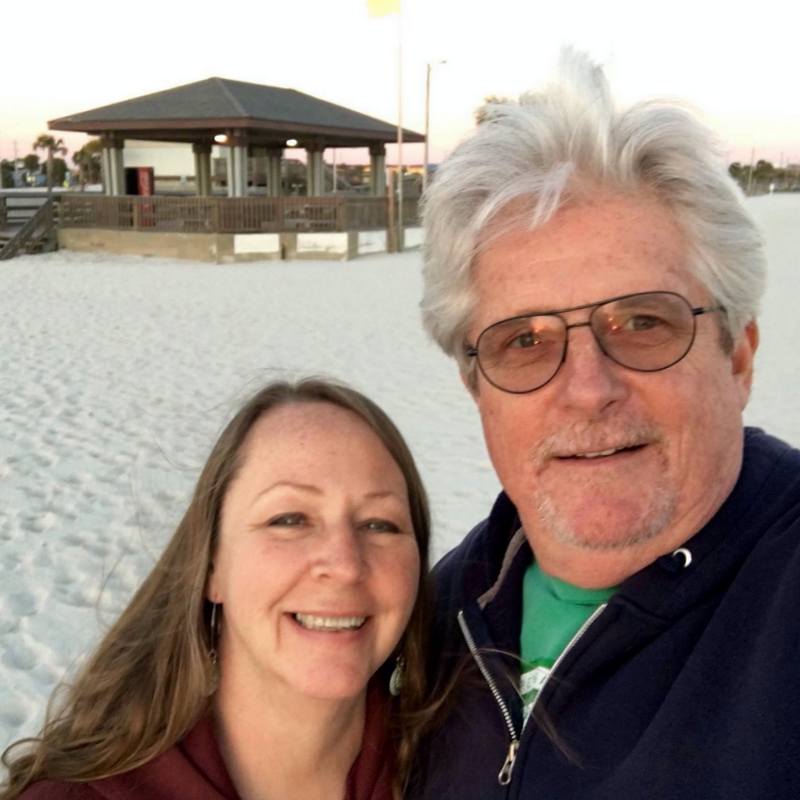 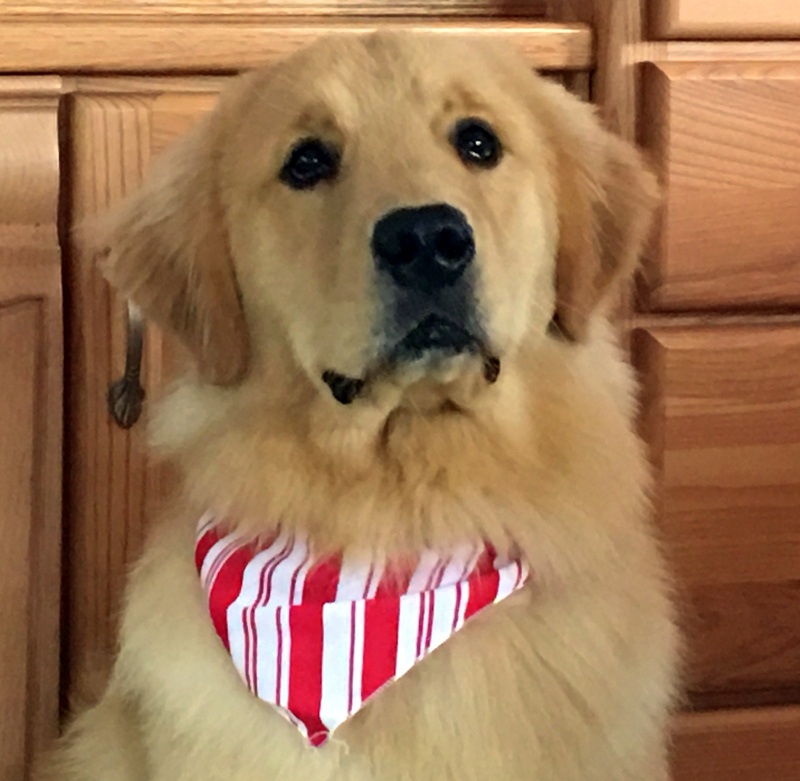