Don had shoulder surgery the Wednesday before Thanksgiving. I think we both were relieved to finally have this over with. He was fortunate in that the surgery was less invasive than it could have been. Now he has a good six weeks of healing and rehab in front of him. No driving, no guitar. I have a feeling Don will soon be climbing the walls without his one outlet. 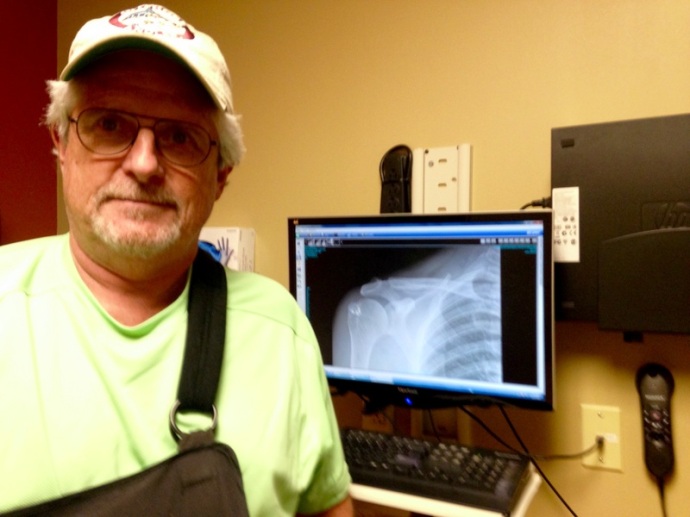 Don with his x-ray in the background

The pain block Don received during surgery was still working the following day so we were able to partake of Rainbow Plantation’s Thanksgiving feast in the clubhouse. Volunteers roasted several turkeys and one lone ham for the meal while attendees brought a variety of dishes  to share. There was everything from appetizers to wine to desserts of all kinds. Approximately 200 people attended which I learned was normal for holiday dinners at this Escapee park. The good folks who oversee all of this have it down to a science so all went smoothly.

Flat Stanley arrives for a visit

The ensuing weekend we spent taking our granddaughter Gabby’s Flat Stanley school project on a tour of Pensacola, Florida and LA (Lower Alabama). We had a lot of fun with this. The remainder of the weekend I spent cooking and printing off Flat Stanley’s photos so I could get them into the mail on Monday.  Don was in no shape to do anything by this time because I had ran him ragged and the pain block had worn off. His pain meds were doing just enough to take the edge off, nothing more.

Rehab began early Monday morning. Don will see the therapist twice a week while also exercising his shoulder at home on his off days. His follow up appointment with Dr. Carter was on Tuesday. Doc removed the  bandages allowing us to see the two small incisions he had made. The shoulder actually looked pretty good, no swelling, no redness nor discoloration. We couldn’t say that about his three previous shoulder surgeries.

In between doctor and therapy appointments we’ve managed to get our  decorations up, both inside and outside of the rig.

Now it definitely feels like Christmas is coming. In the air is the excitement of knowing we’ll be seeing our grandchildren again soon.

Here’s lookin’ at you kid.

4 thoughts on “Relief and Thanksgiving”