The past few weeks have been filled with a little of everything and yet, not much of any one thing. So, where do I begin?

Don has been having some ongoing issues with both of his shoulders. The pain and discomfort have been affecting his sleep and his driving. He’s also noticed a gradual decrease in his arm strength, more so on his right side which is his dominant side. Before coming to Lower Alabama we researched orthopedic surgeons in the area and scheduled Don an appointment with a reputable one. His appointment was the first week of October and the office visit went just as we expected it would. X-rays were taken that showed a bone spur, arthritis, and possibly a separation where previous surgeries had been done. An MRI would be more conclusive but understandably Dr. Carter wanted to approach it in a practical noninvasive manner first, with therapy.

Don is currently working with a therapist twice a week for the next three weeks. If no progress is made during that time, Dr. Carter will then do the MRI to help him determine the next course of action. Thus far therapy hasn’t helped but Don still has until the first week of November to go.

During the interludes between therapy visits, we’ve gone to the movies twice, a rare event for us due to the poor quality of films being produced by Hollywood nowadays. We’ve also participated in campground functions and spent time at the beach, a favorite pastime of ours. The upside of Alabama’s Gulf beaches over southern Florida’s Gulf beaches is that the sand is kept groomed here and the clarity and color of the water is better, on the downside and something that is of great importance  to us, is that Tucker isn’t allowed on the public beaches. This is very disappointing as our beach experience is enhanced by our dog’s company and he too enjoys romping in the surf and sand. Needless to say, our beach days are few and far between.

Being foodies we’ve also been satisfying our appetites. We’ve checked out a few “new to us” restaurants as well as revisited a couple of favorite local haunts. We learned of LA BBQ after watching a television show titled Alabama Barbecue Legends. We were pleasantly surprised to learn it was right down the road from us here in Summerdale, giving us one more reason to check it out. We’re glad we did. The Que was delicious with or without sauce, as were the southern-style sides, of which we got our choice of two.

The second restaurant was one that Don’s barber told him about, the Fish River Grill. It’s not a chain restaurant even though three of them can be found in the Eastern Shore vicinity. It touts itself as having the best hamburgers and seafood in Baldwin county and apparently locals agree. If only someone had also told us that the burgers were big enough to satisfy two appetites. Not only were they filling, they were delicious too. All of the meals at Fish River Grill include a cup of Swamp soup, don’t let the name fool you, it’s excellent, and a smidgen of iced butter cake. We also tried two items popular to the region, a Cajun seafood pistol and the beignet aka Sweet Thang. Both scored highly with our palettes.

At Big Daddy’s Grill on the Fish River with Janet & Dennis.

We were pleasantly surprised one afternoon when our friends Dennis & Janet pulled up to our site in their car. Seems they were having issues with their motorhome and they’d pulled into Camping World just 6 miles north of us for repairs. Knowing we were nearby, they paid us a visit. We ended up taking them to an old local favorite of ours to eat, Big Daddy’s Grill, right on the Fish River. Later, after picking up their coach, they decided to spend the weekend in our rv park before moving further down the road. Luckily they snatched the campsite directly across from ours. This led to another meal out. We ended up going to everyone’s favorite restaurant in this area, be ye local or tourist,  Lambert’s Cafe, Home of the Thrown Rolls.

Kristi & Don
Don just adores this kid. I always refer to her as his 4th daughter.

We feasted here yet a third time since our arrival when friends Vern, Kristi, their 3 beautiful children, and Vern’s mother Nancy came in from Indiana for a Fall Break vacation. Kristi had worked for Don as a manager at Allison Transmission. He took a liking to her and her spitfire personality right away. The two have remained friends even though Don retired 3 years ago. We had a nice time catching up with one another and the kids sure did enjoy the restaurant’s atmosphere.

More friends, John and Pam who are staying just across the Florida state line came to spend the day with us. They are also friends with Dennis and Janet but had no idea that they too were in town so I surprised them by inviting Janet and Dennis to join us. I made my father’s delicious barbecued beef with a couple of side salads and chips for lunch whilst  Janet and Pam both brought sweets to share. We had a wonderful long visit. It was good to catch up on everyone’s travels. 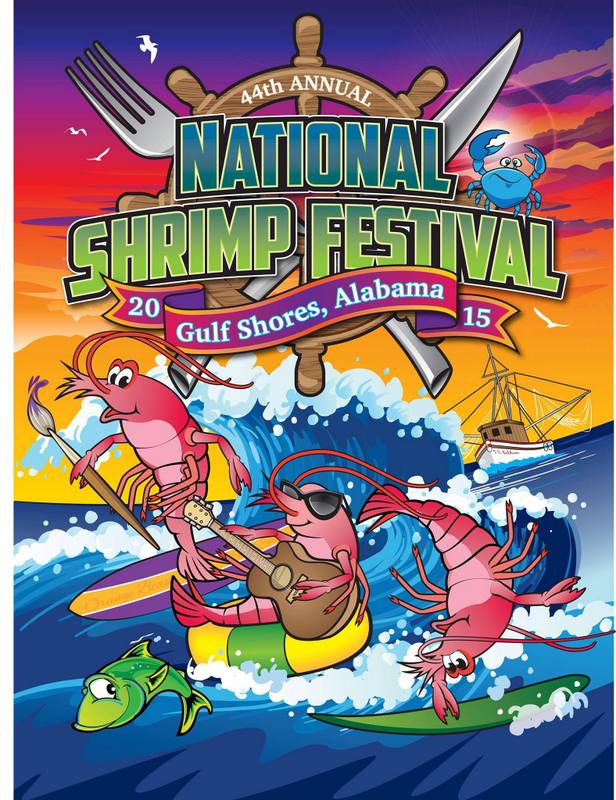 While our friends were camped here with us we all decided to partake of the 44th Annual Shrimp Fest held every year at the Gulf Shores Public Beach. The festival ran for 4 days. With a crowd of more than 250,000 expected we opted to visit on opening day hoping the bulk of the visitors would attend during the weekend. Hearing that parking close to the beach would be limited and parking fees would be high, we chose to park at the mall and ride the shuttle to the beach. Even though we arrived right as it opened, we could easily see we’d made the right decision. Parking was near capacity already.

With over 300 vendors in attendance we spent the bulk of our time cruising up and down the canopied rows stopping occasionally when a display caught our eyes. There were quite a few upscale arts and crafts vendors that enticed us but we were able to keep our purse strings drawn tight. That’s another advantage to living in a house on wheels, no room in which to collect doodads. 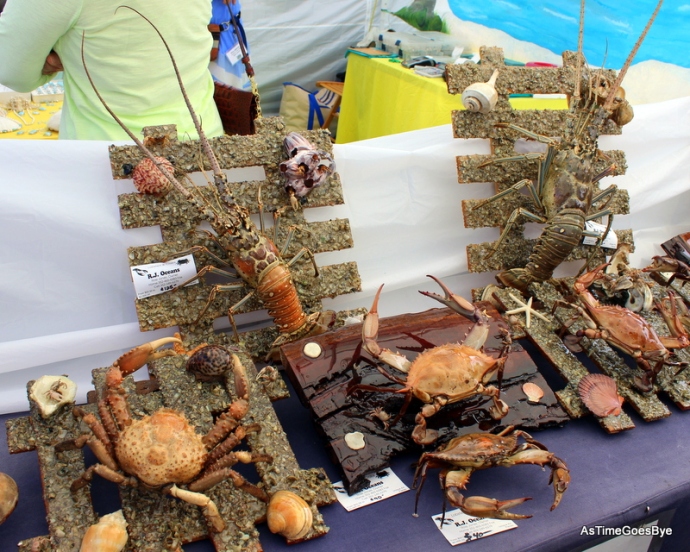 With the huge variety of food offerings it was difficult to decide on which shrimp dish to sample. In the end all four of us chose the coconut shrimp with Don topping his off with a deep fried Oreo cookie and Janet couldn’t pass up on cotton candy. The food was good, the only problem was there just wasn’t  enough picnic tables to accommodate everyone. It’s hard to eat a plate full of food standing up, while holding on to a drink at the same time. Fortunately, we located a bench seat that could fit the four of us right on the beach boardwalk.

Another popular venue at the Shrimp Fest is the live bands. Entertainment runs continuously on two stages, one at each end of the festival grounds, We did stop to listen for awhile but didn’t linger since there was no seating and standing out in the hot sun with nary a breeze wasn’t comfortable for long. 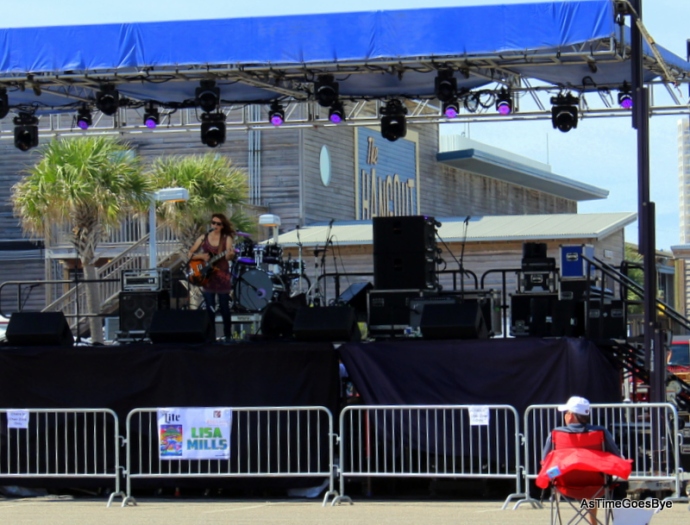 Another thing that has been keeping Don busy through all of this is dealing with legal issues concerning his mother Ardis.  Her hospice care petitioned the state of Michigan to have her placed permanently in an assisted living environment. Since Don is her next of kin and has medical and legal power of attorney concerning his mother, he has been in constant touch with her hospice nurse, insurance company, bank, and state appointed guardian. (Michigan didn’t feel Don was a good guardianship choice for his mother because of his lifestyle.) The state intends be sell Ardis’s home to help pay for her care. However, Don has a lien on the title since he gave his mom funds to aid her in purchasing the trailer within her retirement community. They had agreed he would get his money back should the unit ever be sold.

Not only has he spent countless hours on the phone but he’s been motoring up and down AL 59 getting papers notarized and faxed to different entities. We are hoping he can put off going up there until we head for Indiana in December.

Hopefully we’ll head out on another adventure soon. 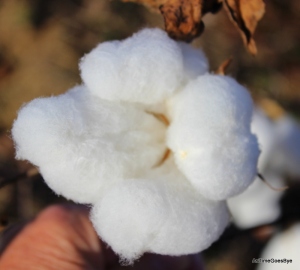 Alabama is known as the Cotton State.
The bolls have burst open & are ready for picking.

4 thoughts on “This and That”